I was a junior at SUNY Stony Brook at this time and some friends and I were excited to hear about Joni coming to RCMH! My friends were able to go down early and get in line (it must have been General Admission) and I came down later, after the doors had already opened. I spent some time looking around for my friends (no cellphones back then!) and found them in the 5th row center!! OMG!! It was AMAZING to be so close! When Joni came out in her cream colored flowing dress, I thought that I had never seen anyone so beautiful! It was one of the best shows I have ever seen in my life!

I will never forget this concert! It was the first time I was seeing her live, though at 23 years old, I had already been a fan for years. My seat was about twenty rows back from the stage, but after seeing that several people were sitting on the floor in front of the stage, I moved up - and there I stayed for the entire concert. She was remarkable, and so beautiful up close like that. When "Miles of Aisles" came out later, I was able to relive the entire experience over and over again. 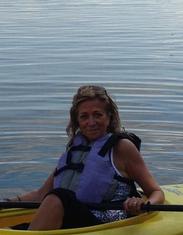 I went to this concert with my girlfriend at the time (I was 19). While waiting outside on line, I noticed a girl from one of my classes at Queens College who I thought was very striking. She was with someone as well. During the concert, on my way to the men's room, I heard someone yell "Queens College!" and turned to find my classmate approaching. Shy as I was, it was a brief encounter, but we started to sit together that semester, and to spend time together, and haven't stopped.
We are still together. We got married about 5 years later, but Feb. 6, 1974 is our truest anniversary. The day we met. Will be 40 years coming up.
Oh yeah, great concert too ;-)

I was only living in NYC for about a month when I heard that news that Joni was coming to NYC. Sat way up in the balcony, but it was a great concert. Piano with the vase of roses.
I remember people yelling out to sing this, sing that. Joni seemed annoyed and said something to the effect of, "Would you ask Van Gogh to paint a Starry Night again?" She sounded wonderful and it was a concert to remember. Thanks!

I was a devotee of Joni's when I went to see her at this concert.
I was 17 years old and my brother and I stood in line for at least 4 hours in the cold until they opened the doors and then we had to run to grab a seat!

My memory of the concert is really rusty and faded! But after the concert we took the subway home to Queens and when we got out of the subway it was snowing and dark. I don't know if it was Joni's concert, the snow, the darkness, the trees...but it was one of the most beautiful moments in time.
My brother is gone now but I'll always remember him taking his baby sister to that Joni concert and maybe loving it as much as me!  [ed.]  [ed.]

Like any other significant event in one's life (first day at school, first time at sex, first drunk, etc.), I suppose we Joniphiles can never forget our first Joni concert, and this Radio City show in Feb. '74 was mine. I had no ticket for this event, but decided to go the scalper's route in the street and wound up paying what I thought at the time to be an unconscionable amount of money ($10!!!) for a seat in the back row corner of the orchestra. I was elated, nonetheless, but after the first set (a set that will be partially familiar to all of us who know "Miles of Aisles" by heart), decided to try my luck at sneaking up a bit. How I did this I will never know, but I wound up sitting on the floor, in the aisle (one of those "miles of aisles"!), right by the stage, in the front of perhaps a few dozen others (and no ushers insisted that we clear those aisles, for some reason!), and in a few minutes, out came the Big Mitch to do her acoustic set. I was in absolute seventh heaven, sitting practically at the feet of Joni Mitchell while she sang and strummed. To top off this bliss, at the end of her acoustic segment, she looked directly at me and blew me a kiss. I didn't want to wash my face ever again. (Fortunately, for one and all, I did!) Over the next 30 or so years, I had the good fortune to see Joni around eight more times in concert, but nothing for me can possibly surpass sitting at the woman's feet and having her sing seemingly to me alone. If "happiness is the best facelift," I must have looked pretty good that night!  [ed.]

Yes! I attended that Radio City Music Hall concert! I became familiar with Joni's music through a young woman named Joanne, who looked remarkably like Joni. We were in the same 9th grade class and would "cut" class together, go back to her parents house and listen to Blue over and over. For me, this was the closest thing to a religious experience. I was deeply in love with Joanne and fell nearly as deeply in love with Joni during that period. So when it was announced that Joni was to perform at Radio City, i was right there. I waited a long time in a long line to get my ticket, and sat there in rapt attention as Joni delivered a magnificent performance.


Joni introduced the song 'For the Roses' with this story (transcribed by Bob Muller):

"All my life I've had kind of a battle going, a running duality between the spiritual & the sensual, you know, and I decided it was time the spiritual won out, at least for a little while...I looked around and my place had gotten kinda Tchoctky'ed up, over-opulent, and I thought that I had strayed off of some kind of path, like I was losing something, I don't know... So I trekked back up to Canada, bought myself a piece of land, decided to put my money where my mouth was, get myself genuinely back to the garden, or at least give it a try, you know?

"I've always been fascinated by the story of Adam & Eve, not because that was when women became a lower class of citizen, you know, I mean, (applause) No, no, the story never meant that to me, I thought that it was a beautiful poem written by a guy with a lot of future projection. You know, a lot of times it's interpreted by evangelists and different clerical people that I've talked to, as a place that existed a long time ago somewhere along the outskirts of the Nile or Jerusalem, something that disappeared, and I'd always thought it was kinda the story of the beginning of knowledge, you know? But I guess I'm side-tripping, running off at the mouth here, but... What it always kinda meant to me was, that, Man, the Beauty of Man, was his superiority while he still maintained his humility, which was before he *realized* that he had a virtue. Because as soon as you've got a virtue and you KNOW about it, it's gone, forget it...(laughter)

"So, he began as a tender of the creatures, not as a superior, he was sort of gentle with them, then one day he woke up and he looked at himself, and said 'Goddamn, they got better plumage, and furs, and everything', so he started to drape himself. Now I like to drape myself with those sort of things from time to time, but sometimes it makes me feel guilty, and that's what happened this particular morning. I woke up with a treacherous case of middle class guilt, so I decided to move myself to some deserted area, and grow myself a garden, and get back to it! Even an artichoke in a terrarium, anything...(laughter)

"My house was in the process of being built, I took a lot of hard furniture, it was like a house of correction I was building, everything was hard, you had to sit straight up in it, you know? I was sort of working on the Thoreau theory too, you know, like one chair for myself and one for society...no, three chairs, one for solitude, one for company, and one for society, that's right....

"So I moved back up there and I was staying in this little cabin, and one night I heard what sounded to me like applause, it was like this clapping outside my door, you know, so I stepped out onto the steps, and....took a bow (Joni laughs)....(applause)....I stepped out and I looked up and right in front of my door was this tree called the Arbutus tree, which I think is really my favorite all-time tree...it's got a really smooth, orange bark, and really smooth rubbery kind of leaves, and it's a very independent tree, just has totally its own will, you can't...you can't tame it, you know? Like there's this street in Vancouver called Arbutus Street, and they tried to transplant a whole lot of Arbutus trees to line it, you know, just like Elm street's always lined with elms, and maple street's lined with maples...so they put in all these arbutus trees, and they just said 'forget it', you know, just kamikaze'd out......."