They took all the trees
Put 'em in a tree museum
And they charged all the people
An arm and a leg just to see 'em
Don't it always seem to go
That you don't know what you got 'til it's gone
They paved paradise
Put up a parking lot.

Hey farmer
Put away your DDT
Give me spots on my apples
But leave me the birds and bees
Please
Don't it always seem to go
You don't know what you got 'til it's gone
They paved paradise
And they put up a parking lot.

Late last night
I heard the screen door slam
And a big yellow taxi come and took away my old man.
Don't it always seem to go
You don't know what you got 'til it's gone
They paved paradise
Put up a parking lot.

As told to Dan Ouellette:

This song ended up in the ballet [the Alberta Ballet Company ballet of her music, Fiddle and the Drum]. It's the only song like it in the ballet and on the album. It's the encore of the ballet, which doesn't usually have one because it's dance. But [choreographer] Jean Grande-Maitre said, "Joni always has encores, so we must have one." I chose to revisit this song and do it so that it has an element of humor in it. I came across a doo-wop pattern and kept going with it. The chorus sounds like bop. I came up with an arrangement that is very French-circus sounding and uses instrumental sounds, like the accordion, that some people may consider square. It works great for the ballet encore - it dances perfect without drums - and on the album, the song keeps the theme going and lightens the feel after "Bad Dreams."

Why is this song still viable? It's taken people a long time to see that we have to cut back on our electricity, but we won't. The idea of this song wasn't popular when I first recorded it, and it's not now either because we're drowning in pop culture." 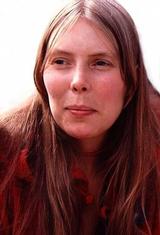 It's good to hear the bald eagle is now able to make a comeback in the southern California Channel Islands.

Below the lyrics of "Big Yellow Taxi" (original version) is the following claim:

"DDT is a persistent organochlorine pesticide and is largely responsible for the great decrease in the reproductive capabilities and consequently in the populations of fish-eating birds, such as the bald eagle, brown pelican, and osprey. Because of DDT's effects on birds, the chemical has not been used in the United States since 1972, and can no longer be used except in cases of public health emergency. At the time Joni wrote this lyric (1967-68), the continued use of DDT was quite controversial. DDT is still used in several other areas of the world."

It's unfortunate that, like the Western majority, you've fallen prey to the anti-human myths about DDT, originating from the singular "authority" Rachel Carson.

I call the myths about DDT "anti-human" because environmental policies such as the policy of banning effective insecticides like DDT, which reduces malaria, actually constitute the oppression and murder of many of the world's poor.

Environmental policies such as this actually have one New Age goal: the eradication of scores of human beings in the name of "saving the planet." Millions upon millions of people have died as a result of bans on DDT, but the eco-radicals _don't care_. Indeed, that's precisely what they _want_. For example: Alexander King, founder of the Club of Rome, once said about DDT, "In Guyana, within two years it had almost eliminated malaria, but at the same time the birth rate had doubled. So my chief quarrel with DDT in hindsight is that it has greatly added to the population problem." (Juurd Eijsvoogel, "Alexander King, the Activist: The Human Lemmings," in Janny Groen, Eefke Smit, Juurd Eijsvoogel, ed., /The Discipline of Curiosity: Science in the World/ [New York: Elsevier, 1990], 43)

One might suppose that such views are only at the lunatic fringe of the environmental movement - in which case one should read the quotations here: http://wakeupcallpage.tumblr.com/post/38481443164/depopulation-eugenics-quotes

In his online article, "The Truth About DDT and /Silent Spring/," Robert Zubrin has written:

"While excellent literature, however, /Silent Spring/ was very poor science. Carson claimed that DDT was threatening many avian species with imminent extinction. Her evidence for this, however, was anecdotal and unfounded. In fact, during the period of widespread DDT use preceding the publication of /Silent Spring/, bird populations in the United States increased significantly, probably as a result of the pesticide's suppression of their insect disease vectors and parasites. In her chapter 'Elixirs of Death,' Carson wrote that synthetic insecticides can affect the human body in 'sinister and often deadly ways,' so that cumulatively, the 'threat of chronic poisoning and degenerative changes of the liver and other organs is very real.' In terms of DDT specifically, in her chapter on cancer she reported that one expert 'now gives DDT the definite rating of a "chemical carcinogen." ' [/Silent Spring/, pp. 16, 22, 225] These alarming assertions were false as well."
http://www.thenewatlantis.com/publications/the-truth-about-ddt-and-silent-spring

Zubrin footnotes that last sentence with the following citation: "J. Gordon Edwards, 'DDT: A Case Study in Scientific Fraud,' /Journal of American Physicians and Surgeons/ 9, no. 3 (2004): 86." Edwards' study can be read here: http://www.jpands.org/vol9no3/edwards.pdf .

Zubrin goes on to debunk the standard myths about DDT: the false claims that it causes cancer, threatens birds with extinction, and threatens ocean life.

Zubrin closes his article with this reflection on the third of those myths:

"For the record, 1979 has come and gone, and life in the world's oceans has continued to flourish gloriously. But, as a result of the mendacity and actions of Carson, Ruckelshaus, Wurster, Ehrlich, and their allies, DDT has been banned, and hundreds of millions of people who might have lived to enjoy those oceans, to sail on them, fish in them, surf in them, or swim in them, to play on their beaches or write poems about their sunsets, are dead."

So, Ms. Mitchell, is this the "life-affirming" worldview to which you subscribe...?