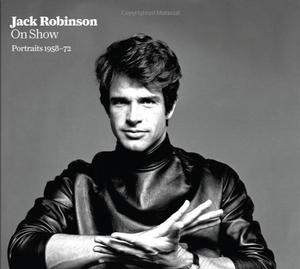 In the late 1950s, Robinson became a major 'shooter' in the fashion industry. In 1965, he connected with Diana Vreeland, editor-in-chief of VOGUE magazine, and broadened his photographic horizons to include icons of the silver screen, Broadway, music and literature. In short order, Robinson became one of the preeminent photographers of the decade, his work being featured in VOGUE over 500 times. Sadly, alcohol and drugs took their toll and, in 1972, Robinson left VOGUE and the Big Apple and spent his remaining years in Memphis, employed as a stained-glass designer. He died in 1997. The photographs in JACK ROBINSON ON SHOW were selected from a collection of over 150,000 images he took in a 25-year career. They depict impossibly young versions of Joni Mitchell, Warren Beatty, Elton John, Melba Moore, Michael Crichton, Clint Eastwood, Michael Caine, Marisa Berenson, Tom Wolfe, Iggy Pop, Roberta Flack, CSN&Y, Nina Simone, Beverly Sills, Robert Joffrey, Zubin Mehta, Lindsay Anderson, Julie Harris, Kenneth Tynan, Leonard Cohen, Herbie Hancock, and others.