Joni's comments from the 1988 eclection art exhibition catalog: "Axilar Moonrise" is a peyote vision of L.A. at night.

Joni's comments from the 1979 StarArt book:
"'Axilar Moonrise' is a dramatization and expansion on a profound moment of friendship and closeness between a friend and me. There's a sun and a moon in it to represent the passing of a period of time. There's a metamorphosis of a woman figure, who I guess is me, either dissolving into the foliage of coming out of it but showing a sense of oneness with nature. The attitude of the lowest figure with its arms outstretched is a kind of all embracing surrender and humility in the face of a moment. Then with the two figures that overlap there's a sense of a secret being shared or something whispered in the ear and the leaning of one figure to hear it. In spite of its lack of literacy for the moment, the person who it was painted for saw it as a pefect rendering of that moment. So having the four figures in no way clouded the fact that it was an intimacy between two people."

(from 'California Rock California Sound' by Anthony Fawcett 198) The painting of "Don Juan's Reckless Daughter" [sic] has many different strands and layers, as do Joni's songs. It is visionary, allegorical and intensely personal. It was a cathartic work for Joni, evolving, maturing, and developing as it did, over a year's period. The larger-than-life size canvas (it is about six feet by eight feet) has four figures in it; the major force comes from two interlocking life-size figures, one male, the other female, with arms outstretched spanning the width of the canvas. This figure is floating in an intense deep blue star-filled sky with the moon half hidden by clouds. Behind the man/woman nude is a third, mysterious eagle-like figure, head crouched down, arms outstretched, ready to fly off into the distance—a spirit departing. Below this scene is the twinkling euphoric view of the city at night, a mass of tiny multi-colored pointillistic dots. A fourth figure, an Indian head replete with war-paint and headdress, appears out of the exotic foliage on the right of the canvas. Directly opposite, on the far left a red sun sets behind strange Rousseau-like tropical foliage. The overall color and tone of the painting is blue, the painting style expressionist but intricately detailed. There is a lyrical, dream-like quality to this new work and a power and intensity never before captured in paint by Joni. It is an accomplished and far reaching statement.


What is going on in this multi-faceted painting becomes increasingly clear when Joni describes both her intent and the details behind its conception: "It began as a compulsion to create in pigment a very special moment between two people, with a memory of that moment in mind, abstracted to the point of the color of that moment—the blues and that blue/green/yellow of the moon. The content I wasn't really sure of. It was a real moment of spiritual closeness and it was a very high and blue setting. It is a poem; it involves my music, and there is a strong sense of spirituality and friendship. It has a lot to do with the primitive peoples of this continent—the element of the Indian—all bathed in the magic of an electric night. The woman is the spirit of Don Juan's reckless daughter, and everything refers to moments in time.

"Now, the figures—the way it evolved is interesting. Boyd helped me carry the canvas outside, and the way we set it up, the branches of a lemon tree fell across it and they made an interesting pattern, so I sketched around this. Then I sketched two shadows, so one figure in there is definitely Boyd, Boyd's presence, and then he sketched my shadow—which I stylized—so the female figure is interlocked with the male. The figures are nude but they're such vivid colors that they overlap each other as if they're transparent—naked tribalness as opposed to anything else. The last two figures the floating figure behind is very eagle, primitive, arms spread out—a sad Indian gesture. People have read religion into it but it's natural; if it does have religion in it, it's older than Christ, very earthy. Then, out of the bushes comes a figure of a woman who has bone structure similar to my own. The woman is really kind of Don Juan's Reckless Daughter, the spirit of that. There's war paint on the cheek, the headdress melts into the foliage, and if I'm in here, I'm in this figure, even though the central female body is borrowed from me and has my attitude and sway back. But this is more of my spirit.

"In the closing of some television channels an Indian rides up to the top of a hill and overlooks a freeway: it has that element to it, except instead of it being smoggy and traffic-jammed, it is bathed in the electric night which you can see from any ridge in L.A. Some of the coloration in the painting is involved with psychedelics—mushrooms—the vision as it begins to throw internal lights, even at night. For instance, the cypress trees out on the street here, which at night would be a dark black with bits of blue, grey and green, suddenly had chartreuse and orange undulating in them; their own light content that they withpremiered from the sun was still present at night. Some of that is felt, especially, as the plants go into a metamorphosis with the headdress.

"The painting took about a year and went through many, many different changes. I mean, I painted in catalystic objects that I would be focusing on while I was working on corners of it. There's a lot underneath the finished product that's going on. The moment that I initially set out to capture was just this period on the rise of the moon. Originally the moon was much larger and I painted in the countenance of the person I was addressing it to (when you write, generally there's a specific person—they come in and out of a song—someone you're addressing yourself to), which served as a catalyst, a confrontation, as a directional source, and as soon as the painting took off, I painted it out. I ended up putting in the sun, too, so you have a continuance of time, a measure of time. The sun and the moon: That was from the first song on the album, 'Cotton Avenue,' the red sun. See, that patch of city lights at the bottom of the canvas is Cotton Avenue, that's the beckoning of the night-life, the twinkle of the city."

"A red sun came rolling down a gray sky
And the frogs and dogs and night birds then,
Started up singing sweet country lullaby.
You see that patch of city lights—
Somewhere in there's Cotton Avenue
That's where I'm going to take myself tonight." [it is possible that this painting was originally titled 'Don Juan's Reckless Daughter' but has since been retitled, as is sometimes the case] 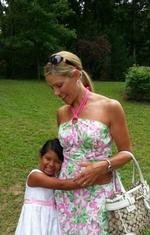 I was first drawn into this paining by the use of blue tones (my favorite color) but as I continued to look at it, it reveals a seemingly unending act of intimate surrender...

An act silure is evolutionary and revolutionary. Him Who In Rise is as well. Hearing phonemes become morphemes is secret and sacred.  [ed.]

This is one of my favorites. It goes on for eternity. The colors again, are stunning. It feels very Wiccan and spiritual yet very current.