Portions of this concert were released on the live album
Shadows And Light. An edited videotape of the concert
was shown on the Showtime cable channel and later
released on videotape, laserdisc and DVD.

Have been a Joni Mitchell fan ever since hearing "For the Roses" on the FM radio back in 1973-74. For the first time I heard lyrics that went beyond the "usual" lyrics; I heard poetry with concrete images. I followed her musical evolution closely after that. Her music was also an influence on my own guitar playing and composing. My older brother was a student at UCSB in 1979 and got me tickets to this concert. To say the least, I was in awe, of her and the caliber of her backup band. To this day, I still believe it is my voice singing in the background on "God Must be a Boogie Man" on the "Shadows and Light" live album. 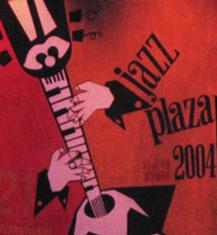 This was the summer just before college, and my buddy Serge & I went to visit his sister at UC Santa Barbara and hear Joni with her group of jazz musicians as they interpreted some of her classics along with tunes off "Mingus".

We were both struck afterward with how this was one of the few instances (for us, anyway) where the live performance went far beyond the studio recordings. Jaco was astonishing; no one before or since could coax that kind of sound out of a bass. Michael Brecker was transcendent, effortless refrains beautifully etching the outlines of phrases in Hejira, and full-blown solos that were sublime. And Don Alias' incredible drum and conga work inspired me to take up percussion.

And there was Joni's gorgeous voice and guitar to bind them all in a powerful package that still resonates with me. One has to imagine that the egos accompanying all of these great musicians were of like scale, yet Joni galvanized them into a compelling collective that sounded as if they had been playing together for years.

I miss my good friend Serge, but I'm glad we shared this wonderful experience; it's a memory that I will always keep with me. Thank you, Joni.